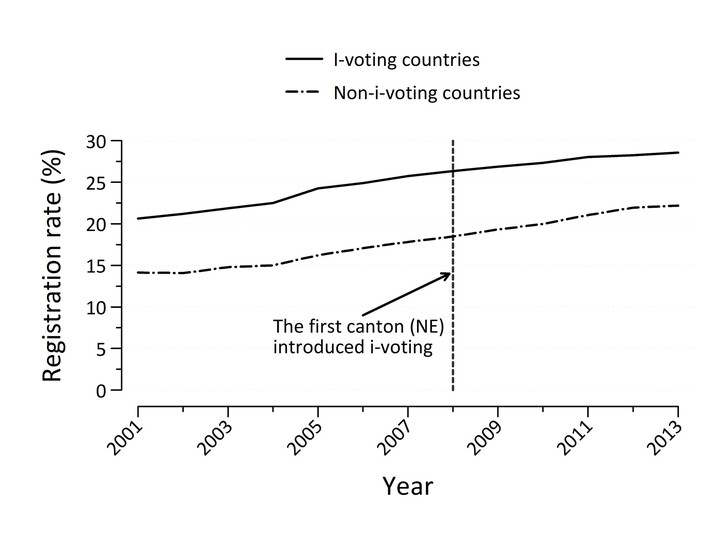 Voter registration rates among Swiss expatriates in countries in which Internet voting was or was not available, 2001-2013

In 2008 the first Swiss canton introduced internet voting for expatriates, thus initiating the second phase in Switzerland’s piecemeal i-voting roll-out. More cantons soon followed, and as of this writing expatriates from 12 out of the 26 cantons can vote online. This paper focuses on the second phase involving expatriates. We address three questions at the core of the internet voting research agenda. First, the popularity question: to what extent do expatriates make use of the new online channel? Second, the ‘who’ question: what is the profile of the typical expatriate i-voter? Finally, the turnout question: did the extension of internet voting to the expatriates have an effect on electoral mobilization? Our findings indicate that the online channel is very popular among expatriates, both if compared to other trials in Switzerland itself and internationally. On the other hand, known patterns regarding the profile of i-voters and the effect on mobilization seem to be also replicated in the expatriate trials. Expatriate i-voters tend to be young, male, and there is some evidence of an upper-class bias. Thus, usage of the online channel seems driven by the digital divide also among expatriates. Moreover, we find some evidence that i-voting did not affect electoral mobilization, similarly to trials involving residents.